A Sin and a Shame

New York Times editorial "A Sin and a Shame" (July 30th, 2010) offers another installation of Bob Herbert painfully writing about concepts he does not understand, and quoting figures that do not support his point.

Herbert then suggests that these figures mean that "cruel, irresponsible, shortsighted policy" has taken hold in American corporations. However, using a simple bread-and-butter real business cycle model involving investment-specific technological change, solved with Matlab program Dynare (this is a DSGE model, or Dynamic Stochastic General Equilibrium Model), we can show the relative movements can the result of far-sighted optimizing behavior, rather than the result of capital in the hands of individuals destined for the Fourth Circle of Dante's Inferno for their avarice, as Herbert perpetually suggests in various columns.

Below, we plot the impulse-response functions of one such model, in which firms maximize profits from a Cobb-Douglas production function, households have log-preferences, capital depreciates, produced goods are either invested or consumed, and both technology and quality of investment good are independent stochastic first-order autoregressive processes. (For the interested, this flavor of model is prototypically described in "The Role of Investment-Specific Technological Change in the Business Cycle", published in the European Economic Review (2001) by Greenwood, Hercowitz and Krusell). We examine what happens when we have a negative investment quality shock. The impulse-response functions to a are plotted below (click to enlarge): 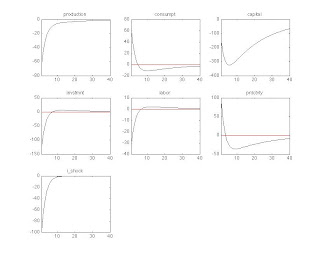 How should we interpret these figures? First, for those unfamiliar, impulse-response functions plot the response of all other related variables to an exogenous shock over time. Here, we plot the reactions of all other variables in percentage points of their own standard deviations to a one-standard deviation negative shock to investment good quality. The "direction" of reaction can be seen by comparing the black line, which is the reaction of a variable to our shock, to the red line, which is a "baseline." We forgo concern about the size of the shocks and focus on the qualitative reactions of each variable.

Specifically, we see that when investment in durable goods this period gives less (lower quality investment goods), we see a decline in both production and labor (increasing back to steady state (or stable growth path) over time), while seeing an increase in productivity, precisely the sort of reaction Herbert pretends is irrational. This is a product not of shortsighted policy, but of perfect foresight (though not perfect information).

Indeed, one doesn't need to examine even simple real business cycle models to explain why we should see productivity rise, labor fall, and production fall by less than labor in the short run. In the United States, labor can be treated as a consumable good. Labor is more flexible than durable goods. In a simple analysis, we can hold capital as fixed and labor is flexible in the short run, while in the long run, both are flexible.

We might imagine our aggregate production function is Cobb-Douglas, using labor and capital, depicted graphically below (click to enlarge). We also denote a dark black line, indicating a schedule for production given fixed capital. Therefore, we might consider any point on this graph viable combinations for inputs and corresponding output in the long run, while considering only the dark black line viable in the short run (were we to have that specific level of capital, .5 in this case). 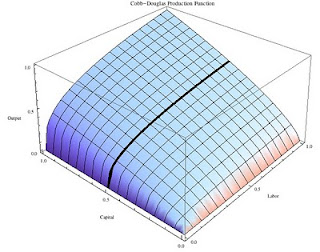 We could simply graph the dark black line in two dimensions (click to enlarge). This represents production along a fixed capital stock, as we would see in the short run: 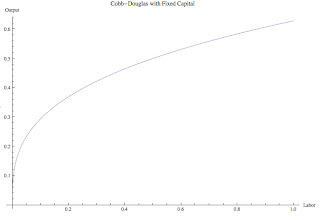 On this graph, we can see our whole story: output, labor supply, and productivity. Marginal labor productivity, which may be defined as $$\Delta$$output/$$\Delta$$labor, is the slope of any point on this line. Average productivity is simply the ratio of output to labor. We can see that any time we shift downward along the supply schedule, labor will, on average, be more productive. Note that this is not true in the long run, because capital will shift as well (this Cobb-Douglas is constant returns to scale in the long run, decreasing returns to scale in the short run). We can display this on the same graph, also writing out productivity below two sample points (click to enlarge): 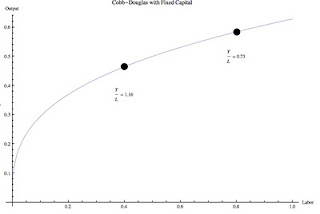 As a last point, Crypto-Marxists like Herbert appear to adopt the poor understanding of capital and labor that Marx shared with Malthus. The belief that capital (land, in Malthus's case) is fixed, and labor is elastic (people have more children and "soak up" any wage higher than subsistence living).


Productivity tells the story. Increases in the productivity of American workers are supposed to go hand in hand with improvements in their standard of living. That’s how capitalism is supposed to work. That’s how the economic pie expands, and we’re all supposed to have a fair share of that expansion.

Corporations have now said the hell with that.

This is incorrect. If corporations could always just say "to hell with that" and not pay workers as much, they would have done so at some point in the past 150 years. Over the last 150 years, the return on invested capital has remained unchanged, while real wages have continued to rise. The mistake that Marx, Malthus and Herbert make is to believe that capital is fixed (inelastically supplied) while labor is flexible (elastic), and so capital gains all benefits from a shift in productivity.

To be clear, the mistaken idea is as follows. Society has a productivity gain. There is a large excess pool of labor that will compete away any higher wages, while capital remains fixed. Therefore, because labor competes all gains away, capital gets all the benefits of a productivity gain.
The reason this idea is mistaken is that there is a large excess pool of possible capital--its primary "input" is simply foregone consumption, and that can be supplied rather easily, if the real interest rate is high enough. Real wages have gone up over time, while real return on capital has not.
The opposite is true--capital is elastic, while labor is relatively inelastic, explaining why real wages have been the claimant on all increases in productivity over the last 150 years.
Posted by Corrections: Page One at 7:33 PM