New York Times editorial "The Unemployed Held Hostage, Again" (November 27th, 2010) simply lies to its readers. It claims that there is no reason for tax cuts, but that extending unemployment insurance is a necessity. "There is no good argument for letting jobless benefits expire, or for extending those cuts."

Both of these claims are false. Harald Uhlig in an American Economic Review article "Some Fiscal Calculus" (also discussed here) estimates that for every dollar of government stimulus, in the long run time-discounted $3.40 is lost. For every dollar given up in taxation, time-discounted $2.40 is gained. On the other hand, Robert Shimer has estimated that unemployment insurance accounts for between 1-1.5% of the nation's unemployment rate.
Posted by Corrections: Page One at 6:28 AM No comments:

A Woman. A Prostitute. A Slave.

The responsibility for the larger amount of unwilling prostitutes is on those that oppose legalized prostitution.
Posted by Corrections: Page One at 9:19 PM 2 comments:

Earlier this year, in May, the New York Times ran the article "Teachers Facing Weakest Market in Years" (May 19th, 2010). The article claimed that


Even upscale suburban districts are preparing for huge levels of layoffs. School officials and union leaders estimate that more than 150,000 teachers nationwide could lose their jobs next year, far more than any other time, including the last major financial crisis of the 1970s.

Corrections suggested this was nonsense, that the comparison was faulty, and that the Times only offered anecdotal evidence. A commenter, Student1776, suggested that, given there was little evidence for writing an article about how poorly teachers were faring, the Times might have ulterior motives.

Here, Corrections offers a bayesian update on that hypothesis. The summer was not unkind to educational occupations. Below, we offer the residual of HP filtered, deseasonalized educational hiring and separations ("taking out" the long-run business cycle variation and homogeneous monthly effects).  This image indicates to Corrections that teacher separations (including quits) have not suffered much during the recession (click to enlarge). 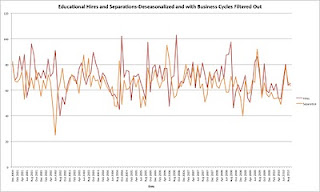 For those unfamiliar, Hodrick-Prescott Filtering ("HP filtering") is a way of separating business-cycle frequencies from time-series data.  For those interested, we can graph GDP and HP filtered GDP from the first quarter of 1947 to the third quarter of 2010, in billions of chained 2005 dollars (click to enlarge): 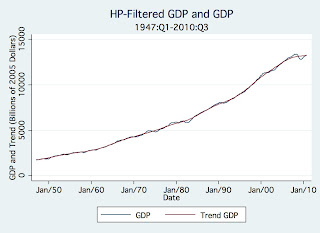 For visual purposes, we can zoom in on the first quarter of 1980 to the third quarter of 2010, to help understand the severity of the recent recession (click to enlarge): 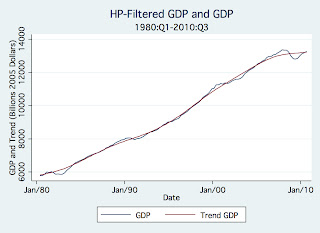 Finally, it is important to note that while deviations from business cycle trends look like quarterly GDP growth, they aren't.   For better understanding, we offer a graph of recessions from 1947:Q1 to 2010:Q3 and deviations from HP filtered GDP in billions of 2005 dollars (click to enlarge). 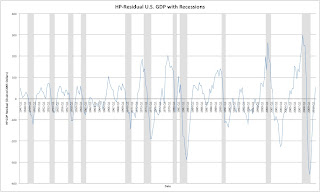 Hopefully, this brief introduction to the HP filter makes clear that our extraction of business cycle trends are not taking out the phantom educational job loss claimed by the New York Times.  This job loss does not appear to exist on either the hiring or separation margin, unless one's loss function is as biased toward finding teachers in trouble as the one used by the New York Times.

Posted by Corrections: Page One at 8:31 AM No comments:

The Cost of Terrorism and Airline Security

Lost in much of the debate on airline security and invasive searches has been a realistic examination of the worth of the costs and benefits of these invasive searches. Given that the last few attempted terrorist attacks, such as the al-Qaeda's Shoe Bomber, or Umar Abdul Mutallab, the Underwear Bomber were stopped in the air rather than by airport security, it's unclear whether or not security has stopped any attacks that Corrections has heard of. Let us leave that aside.

Let's say that airport security could stop all attacks, and without it two Boeing 737's would explode in the mid-air with 175 passengers every year, with no survivors. The average flyer is 42 years of age, and they would lose around of their expected 77.9 year life, or 33.9 years. This is a total 12,565 life-years lost. There are 809,611,003 airline passengers per year, and according to the wait time figures Corrections found, each individual spends about 5-6 minutes in line (between 1 and 25). This is a waste of approximately 7,697 life-years to 9,236 life-years each year.

If this tradeoff is about correct, then a pure utilitarian back-of-the-envelope calculation makes it look as though the time tradeoff from waiting in line alone is about the same magnitude as the cost of death from two Boeing 737's blowing up every year.

For skeptics, the annual budget is $8.1 billion a year. Taking the typical government $6.9 million per life saved, (a statistical measure of the value of human life), it appears as though we are spending the value of 1,173 people each year on the TSA. That is, if the TSA isn't saving 1,173 people per year, the money may be better spent elsewhere.

From these back of the envelope calculations, it appears that everyone would benefit from the government abolishing the TSA and allowing many people to die each year. Further, this assumes the TSA actually has some nonzero impact.

Corrections is interested in comments. Obviously these are back-of-the-envelope calculations and assume away some issues. What first-order losses or gains are we missing?
Posted by Corrections: Page One at 7:53 PM 2 comments:

New York Times article "No, They're Not a 'Hitler' or a Stalin'" (November 16th, 2010) offers a complete misreading of Russian history leading up to the Second Congress of Soviets following the October Revolution of 1917.


Communism has never once arisen — not in the U.S.S.R., not in China, not in Cambodia, not in Cuba, not in Vietnam, not in North Korea — as the cumulative result of social reforms. It was always brought by violent revolution carried out by a fanatical minority, usually during or right after war. Once in power, committed revolutionaries sought to transform agrarian countries such as Russia or China into modern industrial states by oppressing peasants and applying political terror.

This is not true. The lead-up to the Russian Revolution was 56 years in the making, seeing a series of social reforms brought on by both violent extremists and political reforms. In the period between the Peasant Reform of 1861 and the October Revolution, Russia saw the freeing of the serfs, an overhaul of the penal code and judicial system, the creation of the Duma, the legalization of trade unions, organization of political parties, and the creation of local elective bodies with their own taxation rights. To be sure, Russia also saw anti-liberal reforms, but this strengthens the point that this period of great social reform lead directly to the Revolution of 1905, which in turn found its new steady state after the February and October Revolutions of 1917.

The claim that Communism did not result from "cumulative reforms" is a fallacy. Cumulative reforms certainly co-moved with increasing instability in Russia over the course of a half century, leading to the first Communist government, enabling it to kill tens of millions of people until its fall in 1991.
Posted by Corrections: Page One at 3:27 PM No comments:

One year ago today Corrections wrote our first post, on the Fifth of November. In the time since, we have written 268 more posts, and received approximately 5,200 unique visits for a total of 10,300 page views. These articles have ranged on topics from crime and punishment to the economics of medicine, drugs, stock markets, GDP, judge political bias, and more.

Of late, our posts have slowed, as we have shifted away from the brief articles that marked the birth of Corrections and towards more detailed, data- and simulation-intensive articles. Initially, our objective was to Correct the news sources we saw as consistently making economic mistakes in their analysis.

For the next year, we plan to offer fewer articles, less focused on an individual news article. Instead, we shall offer articles that go into more depth and explain an idea we see as one that needs Correction. One example of this might be the idea that it's questionable if unemployment insurance raises unemployment. It does. At all times.

Corrections plans to revisit this decision one year from today. As always, comments, Corrections, and suggestions are always welcomed. We would like to thank you for your readership, and hope our new format will offer our readers something new.
Posted by Corrections: Page One at 10:46 PM No comments: