Below, Corrections takes the difference between daily AAA and BAA rated bonds (Moody's, from the FRED database) and displays recessions (click to enlarge). 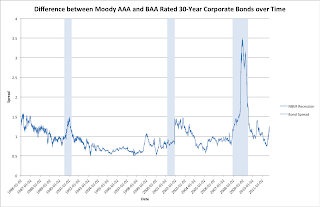 When the data from Operation Twist and the subsequent days become available, we'll put those graphs up too.
Posted by Corrections: Page One at 9:35 AM 3 comments: 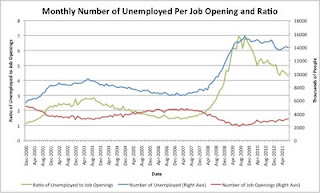 Truth-out.org suggests “Three Charts to Email to Your Right-Wing Brother-In-Law". Here are a few pictures to think about before you do so.

The graphs created by truth-out.org select the last year of the Bush presidency (not his entire term) to note that the recession started in 2008. Recessions actually happen very frequently in the US economy. This gives us a wealth of data with which to compare the current President’s performance. The first graph in the picture below plots the trends of many recessions. We evaluate using the same basis as truth-out.org--national employment statistics. In particular, we plot the employment as a percentage of its lowest value during a recession over time, for a number of recessions (from 1950 on). We can look at the growth of employment after the trough of a recession. Usually, the economy recovers rather quickly; in the graph, this corresponds to a steep uptick after hitting 0.

The current recession is the very bottom black line on the graph. This means that currently, we’re doing worse than any recession in the past 60 years in terms of recovery. Since Obama had been president for months before the trough, it wouldn’t seem natural to blame Bush alone for the slowest recovery that we have seen in the last 60 years. Just below the first graph, there is a comparison our recession--the blue line--with the average recovery after a recession. We are doing a poor job relative to the average.

In the second column, we look at another interesting trend: job growth before and after the passage of Obamacare. While the country seemed to be recovering at a reasonable rate and coming out of the recession before the passage of this bill, job growth slowed dramatically immediately following the passage of Obamacare in April 2010. Below this, the last graph depicts the actual stimulus rollout. The solid black line depicts funds received by organizations from the stimulus. Contrary to the deceptive picture painted by truth-out.org, the stimulus has been doled out at a fairly constant, increasing rate since the beginning of 2009. The article from truth-out.org, however, makes the ridiculous suggestion that the slowing of job growth and the constant unemployment rate is caused by the stimulus “winding down”. That is false. Just because there is no bill on the table doesn't mean that our economy isn't being "stimulated," and these are the results. 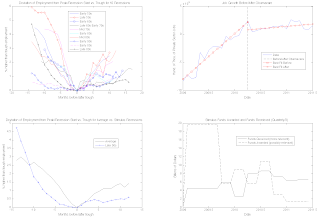 Posted by Corrections: Page One at 5:06 PM 4 comments: