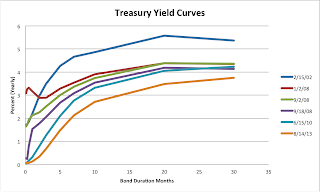 Time Series and Distribution of S&P 500 Returns by Timespan

Below, Corrections depicts the time series of net percent return on the S&P 500 from January 1926 to March 2013 by day, month, and yearly observation (click to enlarge). 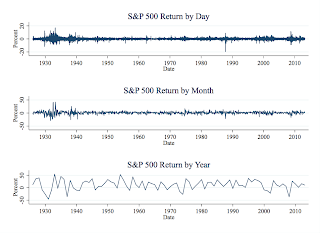 We can alternatively look at the distribution of returns by day, month, and year (click to enlarge): 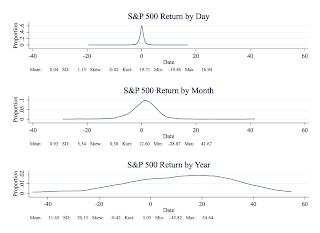 Inflation Expectations over Time by Duration

Below, Corrections depicts two different of the 10-year expected inflation rate (that is, the average yearly rate of inflation over the next ten years).  The first comes from the Cleveland Fed, and the second comes from the TIPS break-even rate. 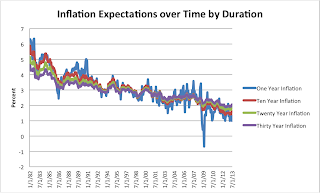 Below, we look at the break-even rate for 10-year TIPS vs. 10-year government bonds (click to enlarge).  Note that TIPS fell dramatically against bonds during Fall 2008, perhaps because of their relative illiquidity during a time when liquidity was highly valued (and are therefore probably not useful as a measure of expected inflation during that period). 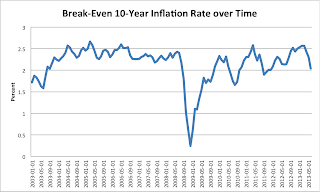 Finally, we look at the two measures together (click to enlarge):  they both suggest that over the next ten years, the yearly inflation rate ranges between 1.5 and 2.5%. 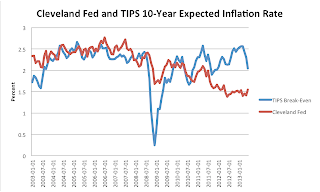 Below, Corrections depicts value-weighted one-year stock market returns (including distributions), one-year Treasury bond returns, and the one-year inflation rate (click to enlarge).  We display each one year lagged return by month, from 1951-2012 (inclusive). 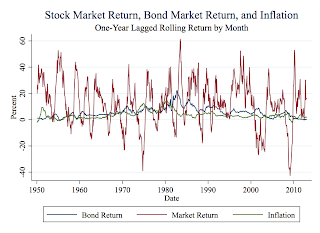 Obviously, unexpected inflation takes away from an already-issued bond's return while having an unclear impact on already-owned stock returns.  Interestingly, simple regression on non-overlapping periods suggests a:
This may be seen in light of:
It is interesting and surprising that while bonds return less than stocks (on average) they return more in periods of higher inflation.  This is counter to the fact that a one log-point fall in unexpected inflation impacts the log return of already purchased bonds by one log-point.
Posted by Corrections: Page One at 5:38 PM 1 comment: 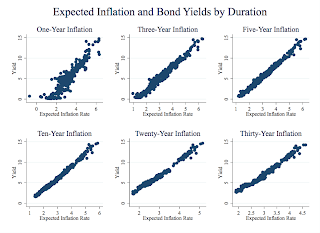 A simple model in finance would suggest a one-to-one correlation between expected inflation and interest rates.  More complex models may deviate from this.  For example, they may allow for pricing of uncertainty about inflation (and therefore an inflation risk premium) that correlates with the level of inflation.

Fannie Mae and Freddie Mac: Borrowing and Payments to Treasury

In September 2008 Fannie Mae and Freddie Mac were placed under the Conservatorship of the Federal Housing Finance Agency.  At the time, they owned around $3.4 trillion in mortgage backed securities and $1.6 trillion in debt.  In return for $100 billion (later $200 billion) in capital investments guarantees, the U.S. Treasury received $1 billion in senior preferred stock with a 10% coupon (later changed to sweep all of Mae and Mac's profits).

How bad a deal was this for U.S. taxpayers?  We know that the Maiden Lane I and II transactions (the bailout of AIG) ended up making money for the Treasury and Federal Reserve Bank (while the Treasury is still $24.2 billion in the hole, it owns 53% of the stock of a company with a market cap of $71 billion).  How much did the bailouts of Fannie and Freddie cost U.S. taxpayers?

Below, Corrections depicts the cumulative draws and dividend payments that Fannie has engaged in with the Treasury (click to enlarge).  Often, the companies were drawing on the Treasury's capital in order to pay the required 10% dividend to Treasury (hence, dividends are being paid to Treasury at the same time draws are being made). 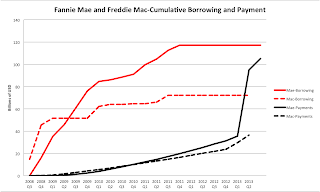 We can alternatively look at the simple difference between net loans and net payments (click to enlarge): 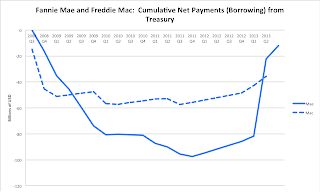 Both Fannie and Freddie look to be on track to pay back the Treasury for capital infusions over the next few years.  However, because these payments are simply payments to the government's preferred stock, and not considered paying back loans (the government offered a capital line, not loans) the government is likely to make a profit on this deal, even if we wind down Fannie and Freddie over the next few years, as both the House, Senate, and White House desire (though in different ways).
Posted by Corrections: Page One at 9:25 AM 1 comment:

Our method of decomposition is to take the deviation of each from its historical norm and attribute that portion of the deficit to its deviation, as the two deviations will always sum to the deficit that year.  For instance, if revenues ran at 18.6% while expenditures ran at 19%, then we would have a deficit of 0.4% per year:  0.1% of it would be attributed to revenues, and 0.3% would be attributed to expenditures. 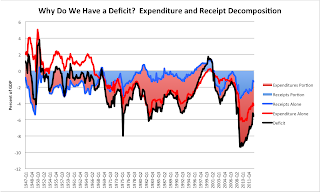 Our takeaway is that from 2008:Q4 to present, expenditures have been 4.62% above historical norms as a fraction of GDP, while receipts have been 2.32% below, giving the "reason" for deficits to be 33.4% receipt shortfall, and 66.5% expenditure excess.

A Tutorial on Bond Yields and Returns

Articles like this one can be confusing to someone not familiar with how fixed-income securities work. Bond yields have gone up, and so bond prices have gone down.  Because the Federal Reserve holds a significant position in different types of bonds, some note that it has "caused a mark-to-market loss of $192 billion on the Fed's holding assets, equivalent to approximately all of the unrealized gains that the Fed had accumulated [emphasis mine]."

Mark-to-market can be dramatically misleading when dealing with fixed-income securities.  They are, after all, fixed income.  Bonds are initially priced with one future set of paths of interest rates in mind.  When new information comes, and interest rates change, their current price naturally changes to fit this new interest rate:  otherwise, there would be an arbitrage opportunity.  However, absent any default risk, the end point of bonds remains fixed:  their price path swivels.  Below, Corrections plots the interest rate path:  in blue, the expected interest rate path, a constant 5%, with a "surprise" in the second period (4 periods before bond maturity) in which interest rates rise to 12% (click to enlarge). 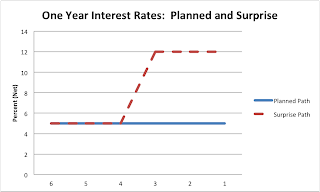 The consequence of these interest rate changes is given simply by calculating the bond prices backwards from maturity (click to enlarge).  Notice that while the surprised bond path went down, the slope increased, as it must catch up to its initial path by maturity. 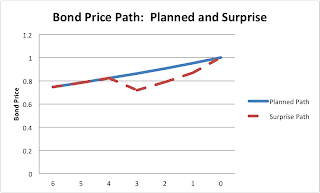 This idea can be seen most easily by taking the log of these two price paths (click to enlarge).  When the shock hits, the bond price is 0.194 log points lower than it would have been otherwise (the vertical distance between the initial shocked path and the unshocked path).  Not-coincidentally, our slope changed from 0.0488 to 0.113:  a change of 0.0645 log points.  Added together three times for the three remaining periods, they exactly make up the difference, summing to 0.194 again. 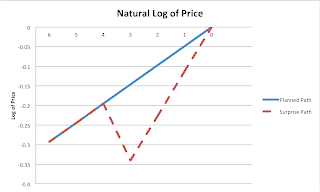 The idea, therefore, is that while the price of bonds has declined and the Fed could lose money in a mark-to-market sense, it now holds bonds that have higher yields, and will make money faster.  Consequently, they only have to hold to maturity to not lose money.  This is especially true the change was due to mid-term rates, as it is empirically true that interest rates are long-term mean reverting.  Such a temporary, mid-course change in interest rates (click to enlarge) yields a temporary change in bond prices (click to enlarge).  Such mark-to-market accounting can be particularly misleading when dealing with price changes in fixed-income securities due to interest rate changes, rather than default risk, as is the case currently. 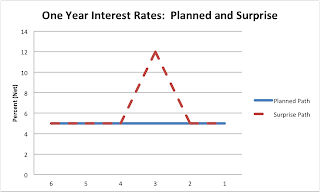 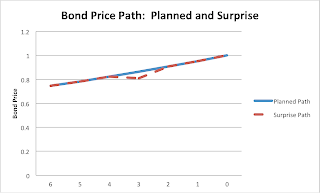