The Middle-Class Comeback Is Under Way

Wall Street Journal op-ed "The Middle-Class Comeback Is Under Way" (February 12th, 2015) makes a painful error while trying to pin the world's woes on the Fed.


The Fed’s easy-money policies were also slamming the middle class by encouraging speculation in—and thus pushing up the price of—commodities like oil and food, which are an incidental expense for the rich and a real burden for everyone else.

Normally of the left, this sort of talk belongs in the economic dark ages (60's, 70's).  Markets are driven by supply and demand.  Speculators essentially never take delivery of their product: they purchase a contract for future delivery with the intent to sell later.  They can, of course, sell to other speculators, but eventually speculators must sell to an agent that will actually take delivery of oil.

Assume first there is no storage market.  Agents who take delivery inelastically supply oil, and demand determines price.  This price determines what the delivery agent is willing to pay, which pins down the price they are willing to buy from speculators.  Whatever heights the oil may reach during speculation is pinned down by what it will actually be worth when it arrives.  Speculation can't impact prices at the pump in this world.  (One might say: "but maybe they can sell at a higher price to the agent and he will pass it on to consumers!"  The question this raises is "if he could sell at a higher price to consumers, why wasn't he before?  They don't care about his costs, only their value and the price.")

There is little difference with a storage market.  With a storage market, speculators can actually temporarily bring up prices, but only at a loss to themselves, if they brought it up incorrectly.  Say speculators anticipate (or act like they anticipate) a demand shock: oil will be pricier, they think.  They purchase many shares and drive the price up because they think it will be valuable in the future.  This causes less oil to go on the market today, and the price at the pump to rise today, and less oil is consumed.

After this, there will be a sharp plunge in oil prices, as storage capacity is sold but demand hasn't gone up.  (That is, speculators could potentially shift supply down and then up.  If there is no fundamental demand shift, this will cause a rise, then a fall in prices, easily mappable to storage).

Inventories did not change enough, and prices were not sharply changing enough, to allow speculation to have any role in the rise in oil prices.  Instead according to Knittel and Pindyck (2013), it seems that (as economic theory would predict) speculation lead to the smoothing of oil supply over demand shocks, actually reducing the price volatility (but not changing the level: changing the level over the long run is highly unrealistic, for the reason discussed earlier).

While theory and empirics line up to tell a clear story (viz., speculators are not to blame for price rises the way you ever read in newspapers), February 12th's Wall Street Journal's op-ed page doesn't just seem to abandon coherence of multiple signals, but even a sensible signal to begin with.  For shame.

Theory: the Federal Reserve is a liberal "long con."  The idea is to drive conservatives to heights of irrationality, causing the party to twist itself in knots to blame the Fed for each new and imagined ill, bringing them to the point of making up easily refuted historical and current "facts."
Posted by Corrections: Page One at 5:29 PM 3 comments:

Below, Corrections displays the Beveridge Curve from December 2000 to December 2014 (click to enlarge). 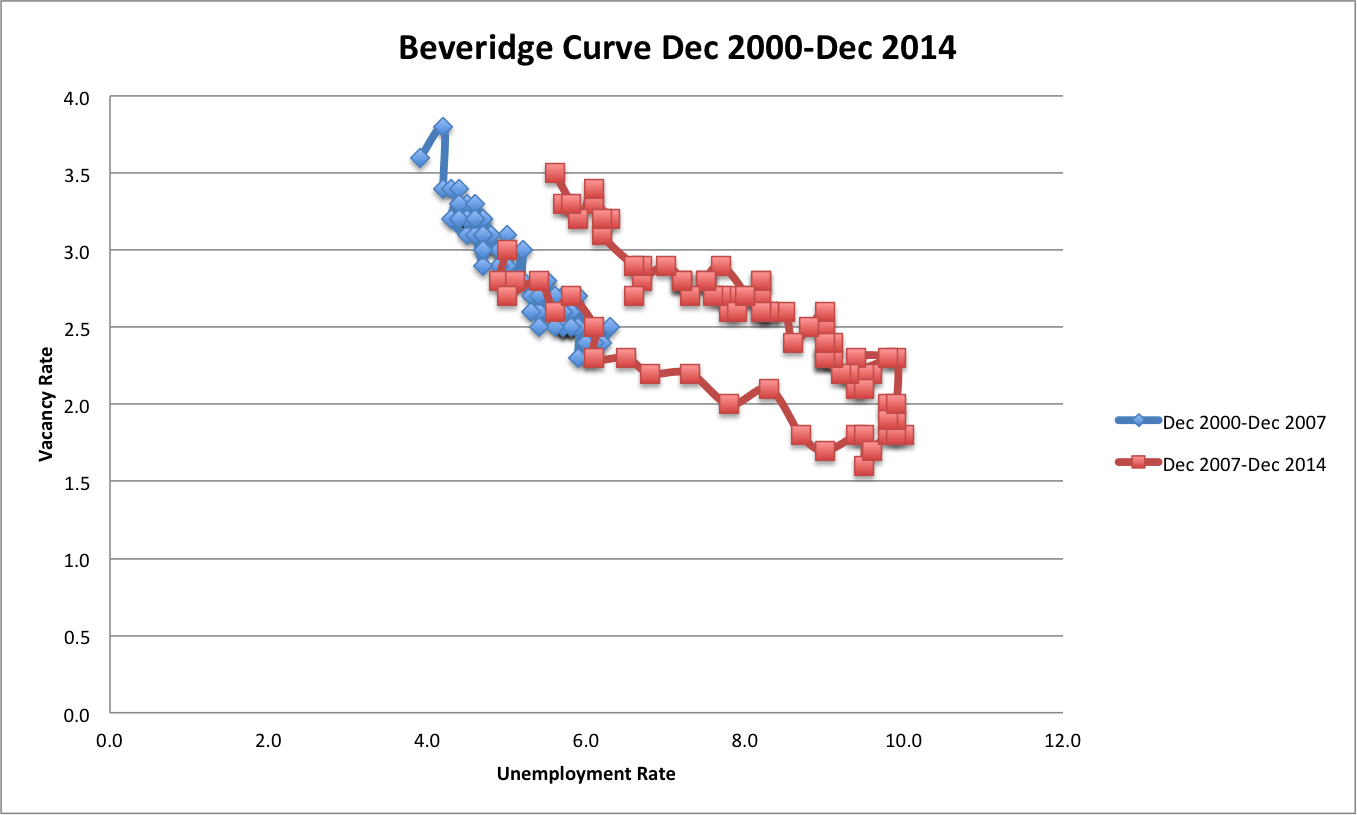 Posted by Corrections: Page One at 9:24 AM 2 comments:

Reuters  article "Senator Rand Paul re-introduces 'Audit the Fed' bill" (January 28th, 2015) discusses a new bill introduced by Rand Paul, Ted Cruz, and 28 other Senators to "audit the Fed." This would expand the yearly audits taken by 1) Government Accountability Office, 2) the Office of the Inspector General, and 3) Private firms, to include monetary policy discussions, minutes of which are currently released with a three week lag.  Detailed accounts of their holdings are released each week.

The real intent of the bill seems to be to monitor Federal Reserve policy discussion in real time.  This will have two effects: first, to generate more comments for politicians like Rand to jawbone Fed officials about.  Second, it will chill discussion in times of crisis.

In the end, chipping away at the Fed's independence is a good way to get higher inflation.  From Alesina and Summers (1993), the relationship between Federal Reserve bank independence and inflation (click to enlarge). 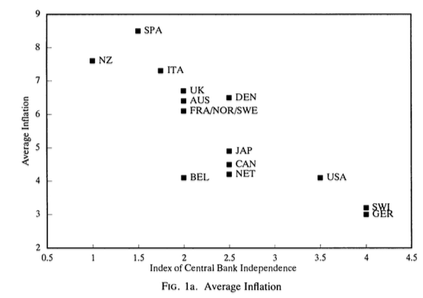 Another aspect of the conservative echo chamber that has lead to insanity.  Sadly, Corrections sees little way to end it.

Edit:  Even a broken clock is right twice a day.  Senator Warren:

[...] but I oppose the current version of this bill because it promotes congressional meddling in the Fed's monetary policy decisions, which risks politicizing those decisions and may have dangerous implications for financial stability and the health of the global economy.

The worst thing for a party about giving up its sanity for poorly-thought-out crusades,is it cedes sanity to the opposition.

Posted by Corrections: Page One at 4:16 PM 4 comments: