For fun, Corrections displays the joint distribution of daily Coke and Pepsi stock returns from 1990 to present, from two different angles (click to enlarge). 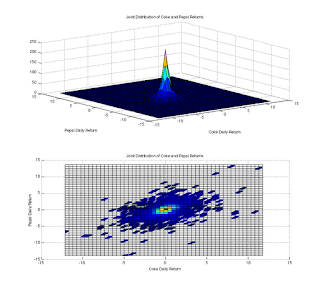 We might also graph the joint distribution of what Coke's daily return was yesterday against what Pepsi's return is today, in the hopes that we can generate an actively-managed portfolio that buys and sells Pepsi based on Coke's conditional return (click to enlarge): 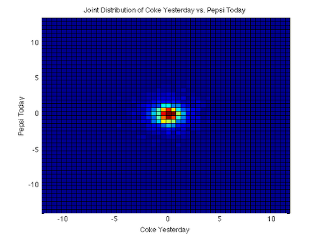 No such luck.  The two are slightly negatively correlated, with a slope of 0.01% return and an insignificant coefficient (even without correcting for serial correlation).  Note that while concurrent returns are moderately positively correlated, the two have no forecasting power for one another.

Entertaining.
Posted by Corrections: Page One at 11:07 AM 1 comment:

When the Crowd Isn't Wise

David Leonhardt writes a rather painful article in the New York Times "When the Crowd Isn't Wise" (July 7th, 2012).  He notes that Intrade thought Obamacare was more likely to be ruled unconstitutional than constitutional:


[Intrade markets] continued to show about a 75 percent chance that the law's so-called mandate would be ruled unconstitutional, right up until the morning it was ruled constitutional.

Corrections sees risk premia and self-insurance everywhere, but let's take the common view of Intrade markets, that the price/10 is equivalent to the probability the market puts on an event.

Are political writers like Leonhardt so ignorant of statistics to know what "wrong" means?  75% represents a distribution of outcomes!  If you looked at all Intrade markets that were at and around 75%, and then looked at the outcomes, if they were "right" (by Leonhardt's incorrect statistic) 100% of the time we should conclude these are poorly functioning markets.

Are Some Forecasters Really Better Than Others?

From the Journal of Money, Credit and Banking, (D'Agostino, McQuinn, and Whelan), the paper "Are Some Forecasters Really Better Than Others?" is entertaining.  (Sadly, not many easy-to-excerpt figures).  The abstract:

In any data set with individual forecasts of economic variables, some forecasters will perform better than others. However, it is possible that these ex post differences reﬂect sampling variation and thus overstate the ex ante differences between forecasters. In this paper, we present a simple test of the null hypothesis that all forecasters in the U.S. Survey of Professional Forecasters have equal ability. We construct a test statistic that reﬂects both the relative and absolute performance of the forecaster and use bootstrap techniques to compare the empirical results with the equivalents obtained under the null hypothesis of equal forecaster ability. Results suggest little support for the idea that the best forecasters are actually innately better than others, though there is evidence that a relatively small group of forecasters perform very poorly.