From 2008 to the present, the Federal Reserve has created large quantities of reserves: has "printed" a lot of money: more than doubling the supply.  We know that in the long run, inflation moves 1:1 with money.  Why hasn't there been inflation? 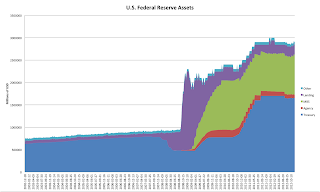 In another inspired graph, we can clearly see emergency lending dying down (click to enlarge). 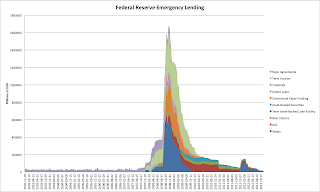 Rather than create money and then retire it, the Federal Reserve reinvested money created for loans into mortgage backed securities and treasury bonds.  This is using printed money to finance a deficit, no doubt.

So why no inflation?  One answer, losing credibility for the last five years and counting, is that prices just haven't had enough time to react.  A better answer is that unlike a money drop, the Federal Reserve printed money and put it into the economy, purchasing assets.  Those assets slowly mature, and take money back out of the economy, allowing the Fed to retire reserves.

Imagine the Fed creates $1 and purchases a Mortgage-Backed Security that matures 10 years from now selling at a 50% discount.  For 10 years, the economy will have one more dollar, and one less MBS in circulation.  Come the end of those ten years, the MBS pays back $2, which the Fed takes to retire reserves, having originally pressed a button to create only $1.  Then the economy now has one less dollar in reserves than before all this, and the Federal Reserve has one more.

There is no magic in all this:  the point is only to emphasize that the Fed isn't just printing money, creating a liability.  It creates liabilities and assets, generally at a one-to-more-than-one ratio in the long run.  This allows it to have low inflationary effect in the long run, because in the long run, no new reserves are created.

Corrections displays a very simple example of how money creation to purchase assets is inflation neutral (click to enlarge):  anyone can do what the Fed did, in theory:  go into debt to purchase assets, "freeing" money that other people can spend (the person who sold the asset now has a credit in their bank account equal to your debit).  Use the returns for those assets to retire your debt, and the economy is back to where it was: nothing new is created in the end.

Will the Fed retire those reserves?  Skeptics will say that historically, governments don't do that.  They're wrong.  Throughout its history Britain would go to war, and cease convertibility to gold. It would "print" money (go into debt).  Then, in the years after the war, it would run surpluses and reduce monetary aggregates until the gold standard could be resumed at the same level it was previously.  For example, from 1797 to 1821 Britain departed the gold standard during the Napoleonic Wars, returning to where it left after 24 years.  This happened again in the U.S. after the Civil War, as the U.S. returned to prewar parity.  This happened yet in Britain after WWI in 1925, as they resumed at prewar parity.

Perhaps the Fed will permanently keep an enormous amount of reserves in circulation.  But the Fed has stayed politically independent since the 1951 Accord, when William McChesney Martin replaced Thomas McCabe as Chairman of the Federal Reserve, betrayed Truman (who had just appointed him) and ended Fed support of low Treasury rates.  While the Fed had agreed to support the Treasury with $200 million worth of purchases over five years, they spent that amount in the first few days, and then refused any further help.  This kicked off a new age of Fed independence.  If this independence continues then debt monetization seems highly unlikely.
Posted by Corrections: Page One at 12:25 PM 1 comment:

Using the first revision of GDP up to 2012Q3, Corrections displays GDP/capita as percent of previous peak (click to enlarge). 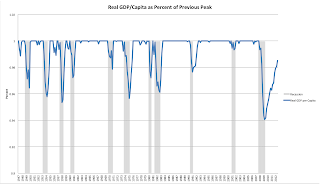 If the trend between trough to now continues, we will reach the previous peak in the fourth quarter of 2013 (by the first month of the fourth quarter, if we broke things down monthly), having deviated from our previous peak for six years.  The previous longest postwar peak was 2.25 years, in the nine quarter between and including 1981Q2 and 1983Q2.
Posted by Corrections: Page One at 9:03 AM 1 comment:

Below, Corrections displays the returns over time of $1 invested in 1942 into a constant-maturity portfolio (e.g. purchase a bond of a given maturity, wait a short time, and sell it again, purchasing another bond of that given maturity with all of your proceeds (gains or losses). Data from CRSP.

The log version of the graph scales things appropriately, so that two increases mean the same thing.  Note the higher slopes in the mid to late 70's due to inflation expectations. 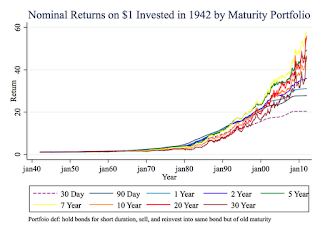 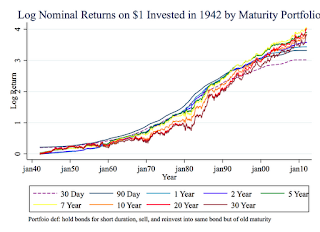 Below, using the IMF's International Financial Statistics Corrections depicts several measures of GDP and GDP/capita for Australia, Canada, France, the U.S. and the U.K. from 1959 to 2011.

First, nominal GDP/capita and the appropriate constant growth rate (compounded annually) in the legend next to each country's name.  This is only mildly useful, given varying inflation rates but is interesting to view (click to enlarge).  Note that the volatility of non-U.S. countries is noise added by exchange rates. 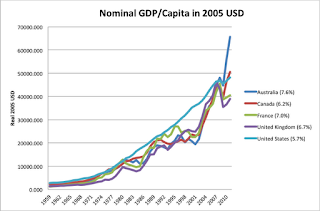 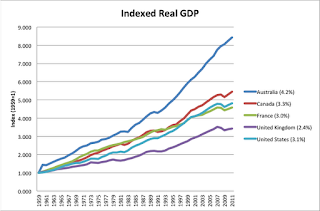 Of course, population increases, so indexed real GDP/capita with compound growth rates might be better (click to enlarge). 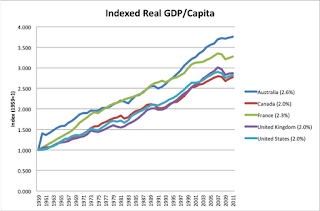 Finally, real GDP/capita as a fraction of U.S. GDP per capita.  The recent crisis, as well as Australia's dodge of the crisis via a natural-resource and Asia-driven boom (click to enlarge) 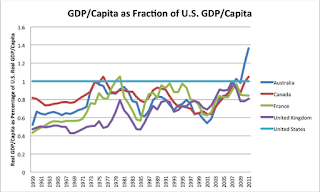 Using NBER's TaxSim, a program that calculates expected income tax rates from a random sample of actual IRS returns, Corrections produces a graph of after-tax income against before-tax income for several states.  This includes only State and Federal Income Tax, along with FICA taxes.  It assumes a married earner with 2 children, a rent of $1500, and no other deductions or income.  Tax rates are for 2010.

This is a worst case scenario in terms of total income:  all is labor income, which is punished most severely.  Capital income, quite rightly, is generally taxed at lower rates. 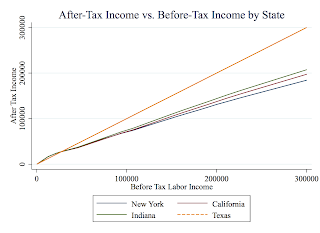 Corrections also plots marginal tax rates over labor income: how much is taken of each extra dollar you earn. 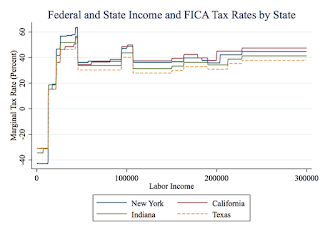