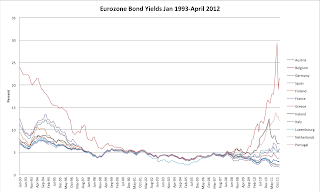 Posted by Corrections: Page One at 7:58 AM 2 comments:

The Religious Right Turns 33: What Have We Learned?

Economics has special ways of dealing with time-series theses like "The Christian Right got into politics, and their share of the population went down.  Therefore, it must have been because of the politics."  On its own, this has little empirical content:  post hoc ergo propter hoc.  But a good analysis can be convincing by showing parallel data.  We can examine other religions that didn't get into politics (or didn't change their relative immersion into politics), or look at factions of Christianity that went into politics more.

Obviously these aren't the only stories one can tell: Corrections is glad to entertain other testable hypotheses of Merritt's otherwise empty theory.  First, we use the Statistical Abstract of the United States to depict the proportions of different religions with a logarithmic scale (otherwise, Evangelicals, Muslims, and Jewish proportions are too small to distinguish) (click to enlarge). 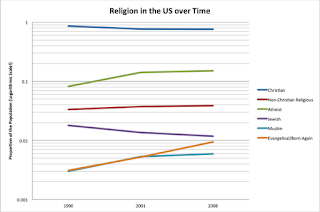 One can see that Christianity and Judaism have declined while Athiests, Muhammadans, and Evangelicals have seen an increase in their proportions.  It would be easier to compare them all to their 1990 proportion, to see the change (click to enlarge): 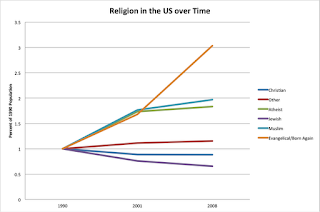 This figure tells our whole story:  if being political has hurt Christians, then why has Judaism, which hasn't changed its political orientation seen a larger fall, while the subset of Evangelicals in Christianity seen the largest rise?

As a note, it is true one can begin to tell stories (ex:  Evangelicals rose by draining other Christians while the rest left, Judaism has its own thing going on, etc.) to make sure Merritt's claim is devoid of testable hypotheses.  Such a tack would ironically and safely bring one's own politics into a religious (non-testable) sphere.
Posted by Corrections: Page One at 12:48 PM 2 comments:

Below, Corrections displays the Balance Sheet of Households and Nonprofit Institutions in the United States from 1949-2011, in real 2011 U.S. dollars (click to enlarge). 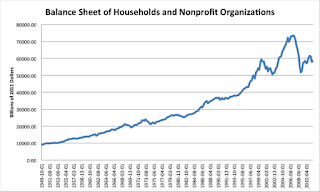 Posted by Corrections: Page One at 9:08 PM 2 comments: