Reported Satisfaction with Life across Countries

A look into life satisfaction across countries yields interesting regional and historic patterns. In the graph below (click here to enlarge), we plot average reported life satisfaction against national GDP per capita (2006 figures). Responses to the question "are you satisfied with your life?" were on a scale from 1-10, with 10 indicating "satisfied." 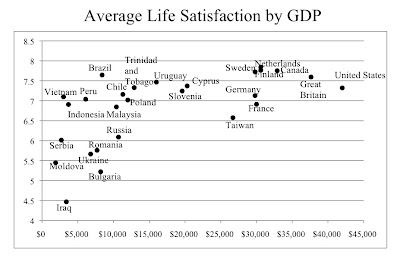 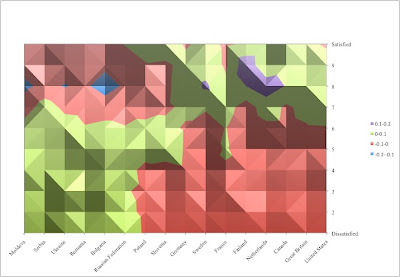 There have been several interesting stories about the cost of imprisonment, torture, killing and assassinations in the U.S.'s War on Terror.  For example, in Afghanistan one often hears of an ineffective criminal justice system causing the U.S. military to release captured militants in the hopes that they can kill them next time.  Similarly, this news article discusses the Obama administration's increased reliance on assassination attempts in, for example, Yemen, Afghanistan, and Pakistan. 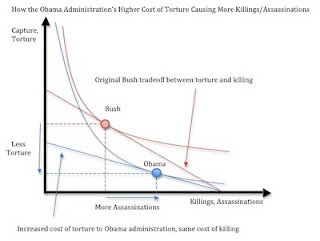 Below, Corrections depicts our own version of Figure 2.4 in Ed Leamer's Macroeconomic Patterns and Stories.  It depicts, from the perspective of 1970, log GDP.  Then, from 1970+3% GDP

and 1970-3% GDP, it simulates a permanent 3% growth trend.  One can see that growth, remarkably, stays within this rather narrow corridor. 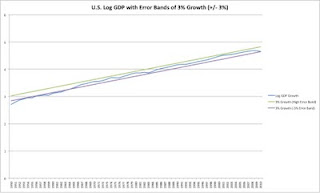 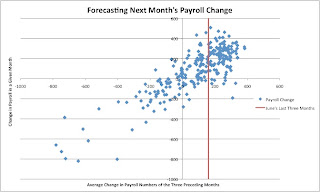 Posted by Corrections: Page One at 5:43 AM 5 comments: 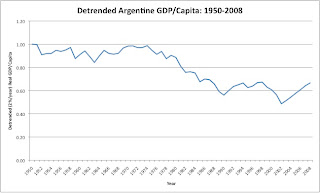 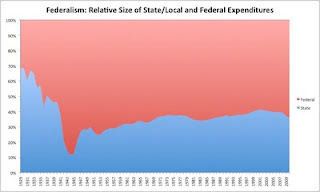 Corrections has been reading Great Depressions of the Twentieth Century

(Kehoe and Prescott, eds.), and found it intoxicating.  Below, Figure 1 from Kehoe and Prescott's first chapter: detrended GDP/capita for four countries between and including 1928 to 1938 (click to enlarge). 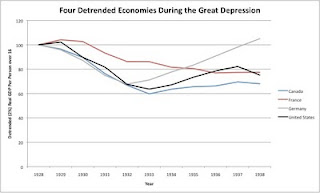 The severity of the decline in detrended real GDP/capita is quite large.  Remember, staying at the starting line of 100 requires 2% growth every year.
Posted by Corrections: Page One at 5:00 AM 1 comment: 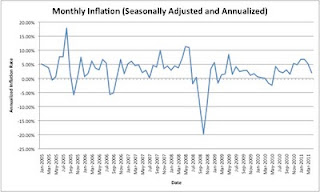 A stroll down memory lane

In January of 2009, Christine Romer and Jared Bernstein predicted the effect of the coming stimulus on unemployment (full text available here). Inspired by others, we look at how well grounded these predictions turned out to be. Below is the monthly series of actual unemployment (the red dots) superimposed over the Romer and Bernstein predictions. They provided predictions of both what the world would look like with the stimulus (the dark blue line) and what it would look like without a stimulus (the light blue line). More than woefully incorrect, these predictions suggest that world we live in post-stimulus is worse than the apocalyptic outcome of the government doing nothing, as imagined by these supporters of the failed stimulus.
(click here to enlarge) 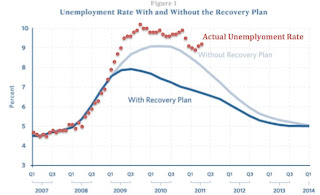 Winning a $10,000 lottery doesn't change the chance individuals declare bankruptcy.  Winning between $50,000 and $150,000 only forestalls it.  This from Hankins, Hoekstra, and Skiba (Review of Economics and Statistics, Forthcoming: "The Ticket to Easy Street? The Financial Consequences of Winning the Lottery"). 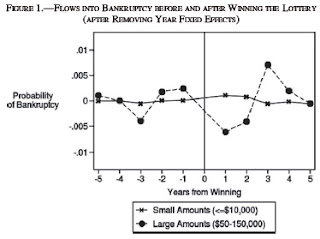 Remarkably clever paper.
Rule of thumb: cash transfers to the poor do nothing in the long run.
Posted by Corrections: Page One at 5:00 AM 1 comment: