Give Peaceful Resistance a Chance

New York Times opinion "Give Peaceful Resistance a Chance" (March 9th, 2011) offers insight into part of an economist's raison d'être. The article by Erica Chenoweth, a Professor of Government at Wesleyan University, misunderstands heterogeneity in revolutionary starting conditions. Her claim:

To back up this statement, she claims that:

Why is this bad research? Because not all revolutions have the same starting conditions. Imagine a world in which there exist dissidents who optimally choose between armed rebellion and peaceful protesting. These dissidents know the government they face and the probability of success of a given venture. Then the observed probability of failure for armed revolution may be higher than of peaceful protest even when both were always chosen optimally. To understand why Chenoweth and Stephan get the results they do, observe the following conjecture in figure form (click to enlarge). 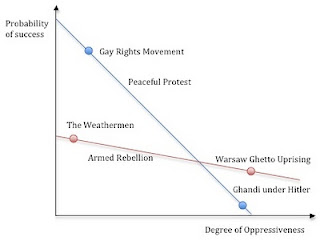 A rational rebel will take the upper envelope of these two decisions. If this is the case, then we will see violent revolutions under oppressive regimes that generally fail, and peaceful protest under non-oppressive regimes that generally succeed. There will be no Ghandi's under Hitlers, Stalins, and Mussolini's. Ghandis can only be successful under men who are inherently peaceful when others are peaceful with them, such as Churchill. Similarly, it may often be difficult for Malcolm X's or The Weathermen to succeed in vastly less oppressive societies, where hoses and dogs rather than machine guns and concentration camps are used to control protest. They are unable to gain the sympathies of the populace. Martin Luther Kings are better suited for the United States than the Malcolm Xs or Bill Ayers of the world.

It is no coincidence that Bill Ayers changed from attempting to bring down the United States by armed rebellion to bringing it down from within--he reoptimized.

The conclusions Chenoweth attempts to draw are faulty due to sample selection.  Armed rebellion may be more likely to succeed conditional on the situation but less likely to succeed when looking at the unconditional success rate.
Posted by Corrections: Page One at 7:59 AM No comments: