Employment Falls and Recoveries: By Industry

Below, Corrections depicts the loss and gain of jobs over the 2007-present business cycle.  We measured the industry peak (defined as the maximum employment between May 2007 and April 2009) and the industry trough (defined as minimum employment between May 2007 and December 2010).  This difference is the "millions of jobs gained between Jan-2007 to Industry 2010 Trough," and is negative for all industries, denoting a loss of employment.

We then calculated the gain from that trough by taking the present employment and subtracting the trough employment, and graphed the two against one another (click to enlarge). Finally, we included a -45 degree line.  Being above that line means expansion from trough past industry peak:  mining, leisure and hospitality, education and health, and professional and business services all succeeded in expanding past their old peaks.  Being below that line means failure to expand past your old peak. 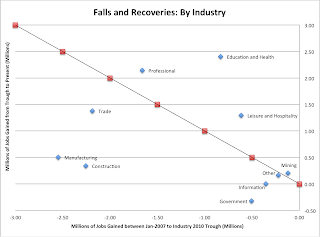 Remarkably, only government (Federal, state and local) jobs fell both during the recession and the recovery, though both losses were fairly mild.  A second graph includes the same procedure for the entire economy (click to enlarge).  While we lost 8 million jobs, we have regained 6.4 million jobs, and with average net job growth in the last 12 months at about 182,000, we should reach that peak in 9 months following June 2013, around March 2014. 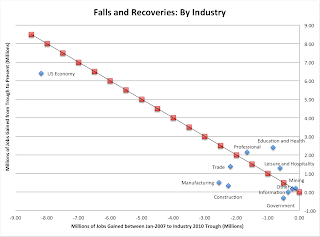 Corrections has been perennially dissatisfied and unclear about the "average" long-run stock market return.  We've always had in our mind a 7% number, but looking at Center for Research on Security Prices (gated) data, or other online sources, numbers seem to vary quite a bit, from 4% to 13%.  The reasons for variance are generally 1)  inclusion of inflation to get real returns, 2)  use of returns based on price but not dividends, 3)  use of different time periods, and 4)  use of different portfolios.

Consequently, we produced two graphs that show real stock market returns.  They take a 10-year portfolio and ask "what is the compounded rate of return over that 10-year window?"  The two graphs reflect the inclusion of distributions (generally dividends, but including other direct payouts to shareholders).  Within each graph there are four lines:  two nominal returns, and two corresponding real returns, crossed with equally-weighted returns vs. value-weighted returns.  The idea behind value-weighted returns is that it reflects the return if you had to hold the market portfolio:  more money in larger market caps, less money in smaller market caps.  The equal-weighted simply buys $1/(Total Number of Stocks) of every stock, rather than $1*(Company Market Cap)/(Market Market Cap).

The four numbers at the bottom of each graph are the average compounded 10-year growth rate.  So, for instance, if you purchased $1 in stock, split evenly across all companies in the NYSE/NASDAQ/AMEX in March 2003 and held it for 10 years through to March 2013 (our final data point), reinvesting dividends all the way and re-balancing each month, you would have received an compounded yearly return of about 11.7% (click to enlarge).  Without including dividends, it would have been about 5% (see second graph below). 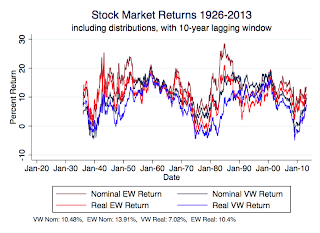 While a graph excluding distributions is less informative, it helps some understand why their personal calculations based only off price are too low (click to enlarge). 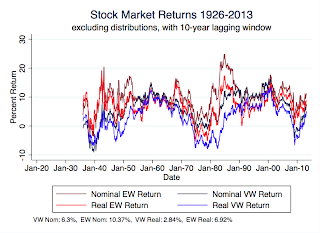