Labor Income of Natives and Immigrants

Below, Corrections displays the labor income of natives (those born in the United States and its territories) and nonnatives (those born in other countries) over time (click to enlarge).  Unfortunately, the CPS only started asking a question about nativity whose answers can easily be compared in 1993. 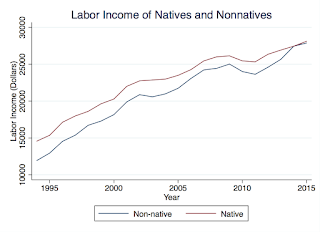 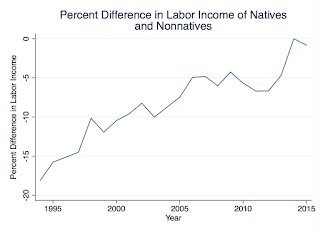 While historically, it's not too uncommon for immigrants to make more than native workers (there are strong selection patterns in immigration (there's a reason some people come to the U.S.), and immigrant workers have far less access to welfare programs than natives and lower take-up of the programs they do have access to, meaning they must rely on labor income more).
Posted by Corrections: Page One at 12:01 PM 62 comments: