The Trends of Federal Receipts and Outlays

Below, Corrections depicts log Federal outlays and log Federal receipts under Reagan, Bush-I, Clinton, Bush-II, and Obama up until August 2013.  We also display the Reagan-Bush I-Clinton trend extrapolated out through Bush and Obama's terms.  We attribute the split January to the outgoing President, as he exits around the end of the third week of that month.

Log outlays tell a clear story:  outlays under Reagan, Bush I, Clinton, and Bush II continued on trend.  They saw a dramatic jump, and then a fairly stark arrest under most of Obama's term (click to enlarge). 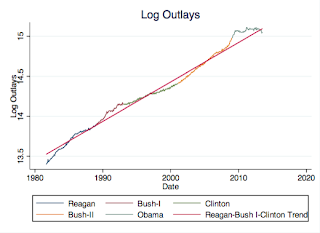 Log receipts tell a different story:  while outlays have gone according to trend, receipts were halted under Bush, and again under Obama (click to enlarge).  For both, this was a result in part of tax cuts (or tax cut extensions) and bad economies. 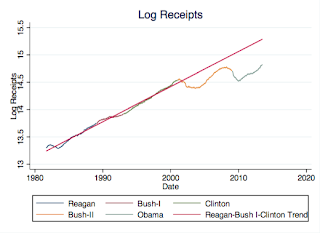 Finally, we depict the two together (click to enlarge):  the short time the blue line was above the red line represents the Clinton surpluses, and the near-zero deficit of the Bush term before the financial crisis ended hopes of a balanced budget. 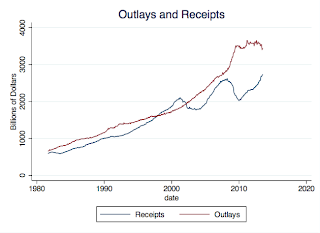