Claims of how many households pay income taxes, or income and payroll taxes, or net tax (thanks to negative tax impacts of EITC) are common, but frequently erroneous.  Corrections looks to help put these to rest.

While it can be looked up, Corrections gives two graphs to give an idea of what households pay taxes.  Depending on our measurements (including Federal or state+federal, no deductions/deductions, etc.), 68.2% and 78.7% of households pay positive taxes.  This differs by about 17%-28% from Mitt Romney's "51%" that  "paid taxes."  About 10% of this comes from not being in the depths of the great recession, most of the rest comes from including FICA taxes (which are rarely included in these calculations), with some of the residual also coming from including state taxes.

First, we display six different measures of the proportion of household heads or households that pay taxes.  We break things up by federal vs. federal+state taxes, and before and after tax deductions (primarily the EITC and additional child credit).  We also include two additional measurements by including SSI and TANF benefits as well as EITC (click to enlarge).  We give these graphs by age of household head. 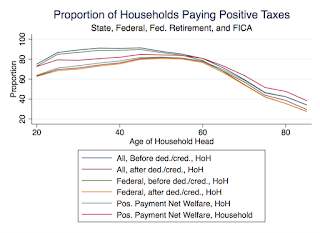 We also display the distribution of the size of welfare payments (EITC, SSI, TANF, Additional Child Credit) conditional on being positive (click to enlarge). 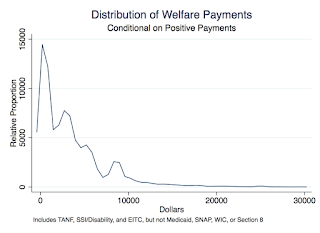 As an aside, Corrections has heard the phrase "IQ's drop by 20 points when discussing politics."  Corrections has a mildly more amusing (tongue-in-cheek) formula with the same concept.
IQ_P = IQ-2*IQ*(R-0.5)^2

Posted by Corrections: Page One at 6:20 PM